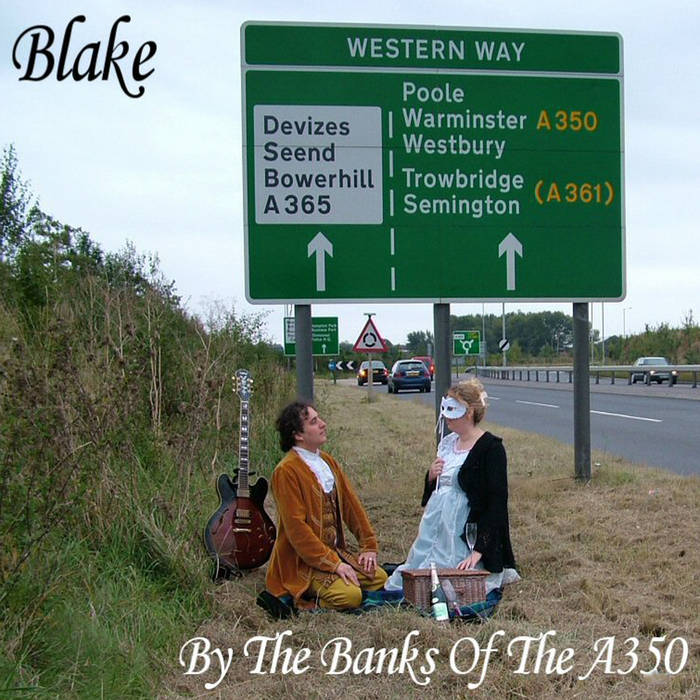 This album was recorded at home in Melksham (by the banks of the A350) in 2007. The cover shot features my very pregnant wife. She was not that amused that I'd made her dress up in period costume and I was dragging her up and down a main road with truckers shouting things at us. She insisted on the mask.

Terrascope Online review by Phil McMullen:
There was a time when we were inundated here at the Terrascope with singer-songwriter albums with a folky, psychedelic pop edge to them, the vast majority of which I confess passed me by although the cream of them (and here the Kitchen Cynics and Todd Dillingham spring to mind immediately) inevitably rose to the top and stayed there. Several claimed inspiration and allegiance to the Bevis Frond; some more obviously than others, it’s fair to say.

It’s been a while, but the Wiltshire-based Blake makes the wait bearable at least. Admirers of the Frond’s earliest bedroom recordings, with squeaky Farfisa bleat, fuzzy guitars and crash-bang drums will find much to admire on his album ‘By the Banks of the A350’, particularly numbers such as ‘Almost Blue’ and ‘I Believe in You’. The opening ‘Soul Agent Pt 1’ sounds for all the world like an outtake from the Fred Bison Five’s ‘Beatroots’ collection, whilst later on in the collection ‘Soul Agent Pt 2’ (arguably the standout number on here) could sit alongside the material on Bevis Frond’s ‘Auntie Winnie’ album quite comfortably.

My favourite moments though are where the guitar explores a more down-home, rural-rock sound not a million miles removed from the likes of 70s acts such as Bronco and Gypsy - ‘Come to Me’ and ‘Goodbye Cruel Pop World’ are perhaps the best examples of this, with the former showing tell-tale signs of being influenced Julian ‘Blake’ Pugsley’s alter-ego as a member of a Beatles covers band, although apparently he’s John rather than Paul.


Overplay review:
Not since the heady days of Adam Ant has a frilly-necked shirt, stockings and shoes with massive buckles on them been essential rock ‘n’ roll attire. But, on the cover of this album, Blake hints at his own peculiar reinvention of the past. Indeed, the Bath-based singer, songwriter and multi-instrumentalist (AKA Julian Pugsley) likes to spread himself around. Across the 15 tracks on ‘By The Banks Of The A350’, he pops in and out of sweet jangly pop, sweaty Britrock, glam, electronica and a few other bits and bobs besides.

The opening “Soul Agent Pt 1”, for instance, is a fizzy ‘60s organ groove, but it’s quickly supplanted by the Housemartins/Shop Assistants ‘80s indie jangle of the bouncy, melodic “Kiss Of Judas”. Things get melodramatic with the Scott Walker balladry of “Goodbye Cruel Pop World”, but it’s tracks like the Fratellis-esque “Being With You”, the early Beatles “Come With Me” and the smooth acoustics “Falling” that provide the base of this record. Strong, well written and soulful pop music that wraps your ears in a toasty duvet of good vibes.

In between all that, though, is the weird stuff that makes things really interesting. “Yuri Searches For God” is a massive synth-off with all the powder-faced romance of Japan or Bowie. “Baby Don’t Be Down” cocks a cream-coloured Trilby to The Style Council’s café jazz. Meanwhile, the brilliant “Sevens & Nines” is a Technicolor Restoration glam stomp with the swagger of Goldfrapp and the pretension of The Doors. Finally, we get to the Morris-dancing-friendly “Banks Of The Sweet Primroses” – a bouncy acoustic number that sounds like you think the whole album might be like if you’ve only glanced at the cover. In fact, there are a hundred things going on in Blake’s head and the grassy verge of an arterial road in Wiltshire is as good a place to start as any.


2007 CD Baby notes:
'By The Banks Of The A350' is the latest release from Blake – 'The thinking woman's James Blunt'. This prolific songwriter from the west of England has recorded and released five albums in two years – over three and a half hours of music, most of which was made in his two bedroom cottage just off the A350 in Wiltshire. Of this latest project, Blake says: “I never meant to record an entire album so quickly after 'Carruthers Gets Bashed', I was just going to release an E.P. I'd written this song called 'Hope You Know', basically an ode to my wife, and I had a few other things kicking about which I thought I might as well put out. One of those things was an instrumental version of the traditional English folk song 'Banks Of The Sweet Primroses' which I'd recorded a la Mike Oldfield overdubbing various instruments playing the same melody again and again. Then the album title sprang to mind and suddenly a load of songs came pouring out. 'Soul Agent Parts 1 & 2' I wrote after listening to Mark Lamarr's alternative 60s show on Radio 2 one evening. 'Kiss of Judas' is a bitter song about a betrayal by a close friend – it wrote itself. 'Goodbye Cruel Pop World' is a tongue-in-cheek valedictory song and fairly self-explanatory. Mr Dawkins should be titled Dr Dawkins really, but my brother-in-law has a PhD and he never uses Dr unless he's booking a table in a fancy restaurant. Anyway, it's about Richard Dawkins, the world's most famous atheist... well, after Stalin and Hitler, of course. 'Being With You' is a song I wrote about six years ago but I'd never recorded. It takes me back to that time when my life was completely different. 'Yuri Searches For God' came about after a jam between myself and the Tascam. I love instrumentals and I was actually trying to write something really relaxing but it took a different course. I'd recorded 'Falling' for 'Final Whistle' but for some reason I held it back from that project and also 'Carruthers Gets Bashed'. I'm glad because it fits in perfectly here and is maybe the best song. 'You've Got To Give It Up, Baby' was quickly tossed off, as it were. I suppose I was aiming for a basic Velvets-y thing. It's a staple in my live electric set, although I was far happier with 'Almost Blue' – it took no time to record - not that my stuff generally does, obviously - but it just all slotted together naturally. Actually, this may be the best one. 'Baby Don't Be Down' is another one from a few years back. Karmatruffle played it a few times at acoustic nights. I never liked it much but my mate Paul (Karmatruffle guitarist who still plays with me) says it's one of his favourites. 'Sevens & Nines' was my attempt at Goldfrapp-style electro-pop, except it's more electro-blues - a reject from 'Carruthers'. It's the only thing I've ever recorded with a complete absence of guitars. I wrote 'I Believe In You' on holiday in Cornwall this summer. Finally, 'Come To Me' didn't really record well – it was better as an acoustic demo, but despite this I preferred it to the other four songs I ended up leaving off the album. They will no doubt appear on next year's rarities project “Antheology” along with other unreleased songs from my archives dating back to 2000.”

All songs written by Julian Pugsley, except 'Banks of the Sweet Primroses' Trad. Arr. Blake, and © Rockhopper Records 2007.
Produced by Blake. Recorded entirely at home.
Photography by AJ Bennetts on location by the banks of the A350 and in The Red Lion, Lacock, Wiltshire.
Thanks to Andrew, Jacqueline and All You Need Is The Beatles.
Very special thanks to Lady Sarah Pugsley, benefactor and cover model.
This record is dedicated to Mandi & Dean.