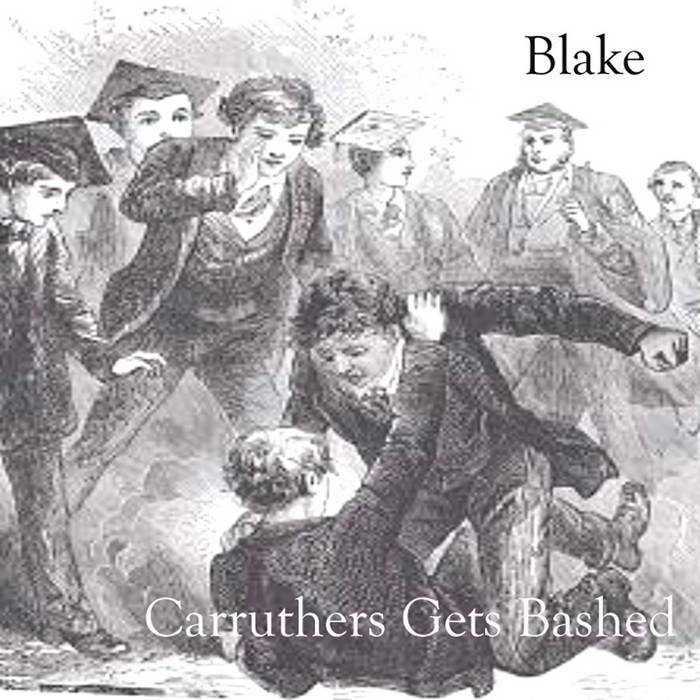 Reading the original sleeve notes below, I realise I again thought I was releasing my final album with Carruthers Gets Bashed. I assumed the cupboard was now finally bare - what an idiot! I find it inexplicable that I came to this conclusion when I knew full well that I had left off three songs that would appear on what would be my next album, By The Banks Of The A350, just nine months later: Falling, Baby Don't Be Down and Sevens And Nines.

I felt like Carruthers Gets Bashed was a step up from Final Whistle in terms of production values. I resisted the urge to utilise more than eight tracks on most of the songs and I remedied my mistake of placing the vocals too high in the mix that I had made on my previous effort. I mixed using headphones rather than speakers for the first time and this seemed to help.

This is my fourth album (if you include Karmatruffle’s What You Do Comes Back To You) and, possibly, my last. Simply because I’ve nearly run out of songs! Good ones, at any rate. I still had some left after Final Whistle that I was going to let die, but for some reason they kept niggling away at me. After an enforced break from all things musical during the latter part of 2006, the New Year arrived with fresh inspiration and I decided to give some of these discarded orphans a chance. I originally intended to record a single called Blake’s 7 inch. This turned into an EP, Blake’s 7 inch (extended), and, after I’d recorded six or seven songs, I realised it was going to be a fully fledged LP.

When I was in Karmatruffle, we’d toyed with the idea of calling our album ‘Carruthers Gets Bashed’ – can’t remember why exactly, but it was something to do with Paul’s experiences at Cheltenham Boys College. The tune itself was originally from a song called ‘Dirty Old Man’ which was rejected by the band mainly because of its ridiculous lyrics. It reminded me of the Grange Hill theme – in a ‘Ripping Yarns’ kind of way – so I thought it worked well.

‘You Could Be Part Of My Dreams’ was the last song to be written. I went to see Duke Special play in Bristol the other day and it’s kind of inspired by him. The chorus I dreamed. I was onstage singing it with, I think, Linda Ronstadt. I was Van Morrison!

‘She’s Not All That’ and ‘A Better Way’ were both recorded by Karmatruffle for our single release on the Ectomusic label. Unfortunately, after we fell out with the company we had no access to the sound recordings and we couldn’t be bothered to record them again for our album (having spent over six months working on them in the first place). I re-recorded them based on the original demos I had made on my Tascam four track. I kept Magda’s original bass line from the tape for A Better Way and built the song around that. I discarded the record company’s alterations to ‘She’s Not All That’ and enjoyed recording it as I originally intended.

‘Marketing Man’ was a song that never went further than a demo but I was desperate to record it as I could hear the cowbell part and I’d always wanted to have a song with one on! Perversely, I don’t even own a cowbell so I had to settle for a frying pan. ‘Make Up Your Mind’ is a song that after I’d finished writing it I was convinced it would be a huge hit for Robbie Williams and my fortune would be assured. How wrong I was.

Café Retro I recorded in 2002 and I simply added some reverb to the original four track recording. (Apologies to John Barry.) ‘Man of 1000 Years’ I wrote about and for Danny Kirwan. It’s pieced together with the names of his songs and it’s just about my favourite thing I’ve written. ‘Bluest Eyes’ I actually recorded for Final Whistle but it didn’t make the cut. However, on re-listening I realised it was a lot better than I remembered and I thought it slotted in well amongst the mainly noisy stuff I’d been recording for 'Carruthers'.

‘Sick and Tired’ is a song I’d never even demoed. It’s clearly influenced by Elliott Smith. ‘Breathe’ is about some heavy stuff that Sarah and I have been going through lately. I just felt it was time to do a Neil Young thing. I sacrificed a song called ‘Sevens & Nines’ to make room – it was inspired by Goldfrapp and had an eschatological bent, but I didn’t really like the idea of an electronic blues too much.

‘Give It To You’ was a song Karmatruffle turned their noses up at. I wrote it in France at the same time as ‘Beautiful Star’. ‘Wishing On A Star’ was another rejected one – I was really pleased with the way the recording of this one turned out.

"There’s a warm glow to the 13 tracks here from Bath singer/songwriter Blake, AKA Julian Pugsley. ‘Carruthers Gets Bashed’ is an album swimming in hazy ‘60s melodies, sparkly indie and beer-fuzz Britpop. And why not. It’s good to see a man in touch with his emotions. He’s probably not afraid to have a good cry every now and then, either.

“You Could Be Part Of My Dreams” is a suitably hearty start to things. A singalong in the style of Dylan meets Snow Patrol, it’s 100% instant happy-making. Similarly, the Hammond organ-fuelled, “She’s Not All That” has a touch of the Monkees. However, “Marketing Man”, “The Bluest Eyes” and “Café Retro” filter their grooviness through a slightly quirkier, more restrained Belle & Sebastian filter to make sweet, affecting pop songs.

It’s not all Rickenbackers and flute sounds, though. “Sick And Tired” uses chiming piano for a classy Supertramp sheen. “A Better Way” and “Breathe” also ring the changes with fuzzed-up mix of Led Zep guts and Oasis swagger. “Give It To You” is an even darker proposition as a Pixies bassline rubs up against slide guitar to generate some evil heat.

While Blake may falter slightly on the more serious moments (the earnest folk of “Make Up Your Mind” and slightly maudlin “Wishing On A Star”), it’s the passion and colour of his more propulsive tunes that makes him memorable. Take “Man Of 1,000 Years”. It’s the most happily frantic cut to come out of a stereo since The Boo Radleys’ “Wake Up Boo”. But where there’s sunshine and adrenaline, there’s also soul."

Thanks to: Sarah, Cas, Magda, Dean, Amanda, all the Carters and Pugsleys, everyone at St. Katherine's and you for buying a copy of this CD!

'And he said unto them, Take heed what ye hear: with what measure ye mete, it shall be measured unto you: and unto you that hear shall more be given.' Mark 4:24