What You Do Comes Back To You 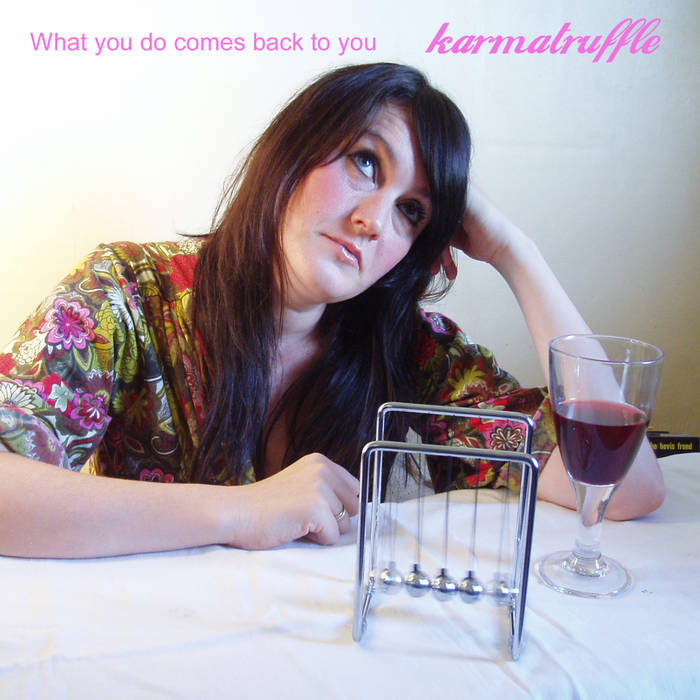 What You Do Comes Back To You was recorded on a farm in Gloucestershire over the course of three weekends in November 2005. We had parted company with our record label for reasons I won’t bore you with after the release of our debut E.P. She’s Not All That in the summer. We selected the ten tracks which best represented our live shows at that time. We wanted to capture the energy of a live gig and to his credit producer Simon Plater did an excellent job. He used solely analogue equipment which impressed us no end. However, for some reason he managed to wipe two of the master tracks completely during the sessions which meant they had to be recorded again from scratch. This is why only Sarah’s vocals are featured on ‘When You Come My Way’ as I had to re-do the bass (she was unable to make the six hour round trip from Essex for this particular session) and why none of Karmatruffle other than myself appear on the title track! In fact, I had to re-record this one on the day I went to pick up the master tapes from Simon. He was very apologetic and said he didn’t understand how it had happened but ‘What You Do Comes Back To You’ was sadly lost. He asked if we could do without it but I said no it's the title track! He drafted in a drummer from Bath, Pedro Goble, to drive up to the studio that evening to lay the drums down on a new version and then Simon and I tracked the other instruments on top. I finished my vocals at about three in the morning and by the time the sun rose I walked away with the ten track finished master in my hand. To compensate I have included the studio rehearsal of the title song as a bonus track so you can get some idea of how it was going to sound – Jamie originally put down a very different drum track than the one Pedro played. Poor Pedro hadn’t even heard the song before and I had no demo to play him when he came to the studio. I just sang it to him on the guitar and he did his best. Funnily enough, after the initial shock had worn off, Jamie ended up saying that this was his favourite track on the LP.

Karmatruffle was formed by myself and original bassist Magda McCaffry (nee Singer) in 2003. We originally conceived the idea as a Bevis Frond tribute group but soon realised that we were writing too many of our own songs to have much room in the set for our beloved Bevis. Initially, Amanda Ranson was the drummer and we started life as a three piece. Amanda played the drums just like Mo Tucker and I loved the sound we had then with me doing my wailing away erratically on lead and Magda pounding power chords on the bass. It was all very dirty; there was a lot of riffage in a Pixies meets the Velvets via The Frond type way. However, Amanda suffered from terrible stage fright and left the group to be replaced by Jamie Jordan, who, along with Paul Kench, had been founder members of my previous band The Dandelions. Once Jamie joined we began gigging in earnest around Cheltenham and Gloucester. Our shows featured a mixture of mine and Magda’s songs (including her ‘Astronaut’ and ‘Without You’ which later appeared on my Antheology album) and always the following covers: Love’s ‘A House Is Not A Motel’, The Bevis Frond’s ‘Anodyne’ and The Undertones’ ‘You’ve Got My Number’. Paul came to see us play one show and was so impressed with our new found formula he asked to join. We had no hesitation in welcoming him back on board. By this time I’d written ‘A Better Way’ and ‘Such A Shame’, as well as completing my first solo LP, Solomon’s Tump (also available from Bandcamp in remastered form!)

Our career took off, however, after Paul began dating the head of a London independent record label (nice work, Paul!) We were duly signed (although I actually had to persuade the label to sign Karmatruffle as they intended to sign just me on the strength of Solomon’s Tump) and we set about recording our first three track E.P. (She’s Not All That). We played shows up and down the country including Night and Day, Manchester, Cardiff Barfly, Cavern Club, Liverpool, Bar Academy, Birmingham and London’s 100 Club and Hope & Anchor. We shared bills with the (then unkown) Arctic Monkeys and Stephen Fretwell.

Magda played on the E.P. but couldn’t stand the travelling so quit the band just before we began recording the album (see my song 'Goodbye Cruel Pop World' on the By The Banks Of The A350 album). Sarah Anthony from Harlow was recruited via the NME but the band was not destined to last much longer for purely logistical reasons. Jamie was now at university in Birmingham, Paul had moved to Swindon, I had got married and moved to deepest Wiltshire and Sarah was out in Essex. We rehearsed mainly in Maidenhead as a sort of compromise, but it was a nightmare and very costly to even get together. Our last shows were at Cambridge University and Hertford Corn Exchange early in 2006 promoting the What You Do Comes Back To You LP. We were on fire musically by this time but exhausted and pissed off with driving everywhere. Burned out you might say. It was time for me to begin recording at home.

Additional musicians:
Rob Schonfeld: Keyboards on ‘Trying To Get Out Of The Rain’ and ‘Sugar Baby’

Additional thanks to: Sarah, Sophie, Fran, Mickey, Jim, Andy, John, Nick and all our friends and family for their support in a wilderness of apathy.